Ultrasonic washers are excellent for washing goods where the contamination is particullarly engrained. Ultrasound cleans by generating waves which on impact creates microscopic vaccuum bubbles on the surface of the goods. When the bubbles implode a very high pressure is created on the point where the bubble was formed. Which frequency is the most suitable is decided by what should be removed from the goods. Contaminants which are less firmly engrained such as oil should be treated with a higher frequency which generates many smaller bubbles. Contaminants which are more firmly engrained like for instance oxides are removed more efficiently with a lower frequency which generates fewer but larger bubbles. The detergent which is used should be adapted for ultrasonic cleaning. 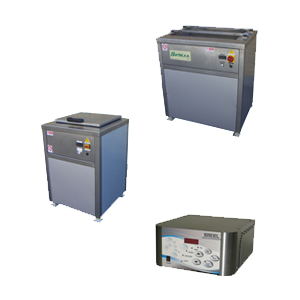 Ultrasonic washers for heavy duty cleaning. Can be used as stand alone machines or be integrated into a cleaning system with several steps. 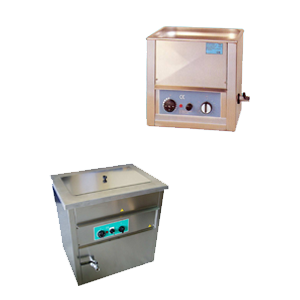